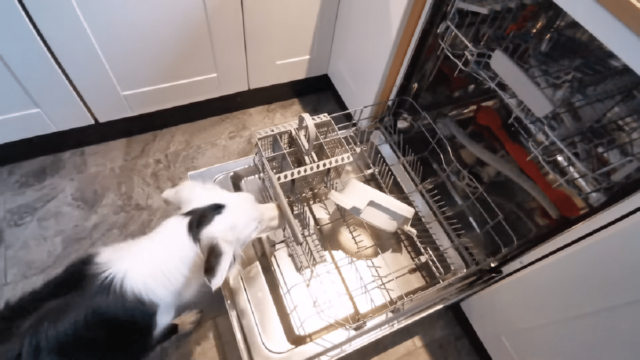 If one were to list the reasons why dogs are great, they would run out of paper. These furry creatures offer humans friendship and love without asking or expecting anything. But aside from being a man’s constant companion and loyal protector, dogs can also be helpful assistants around the house.

A pet owner from Sark, Channel Islands in Europe, took the term ‘domesticated animal’ to a whole new level. Instead of regular dog tricks, this brilliant owner taught their canine how to load the dishwasher. They captured on video their Collie-like dog named Yari performing the house chore in the kitchen.

The impressive clip showed Yari picking up a white plastic container off the floor and looking at its owner behind the camera. The intelligent canine then placed the item on the dishwasher rack using its mouth. Yari nudged the container further inside and looked back up to its human parent for approval.

Seemingly content with its owner’s silence, the helpful canine used its muzzle to roll the rack back inside the dishwasher. Yari stepped onto the door with its two front paws to get a better angle and maneuver it easily. When it was fully inside, the dog hopped back down to the floor and closed the door using its head.

The dog owner filmed the amusing footage on November 17 and shared it online. With what their talented pooch could do, there is no doubt that Yari’s human parent was quite impressed and pleased. The proud human even told ViralHog that they were the ones who taught Yari to load the dishwasher.

The helpful canine saved its owner the trouble of doing the chore thanks to its impressive talent for loading the dishwasher. Given Yari’s immense brilliance, the dog owner might also be able to teach their pet to push the ‘on’ button. Now, this would be a remarkable skill for the pup to learn.