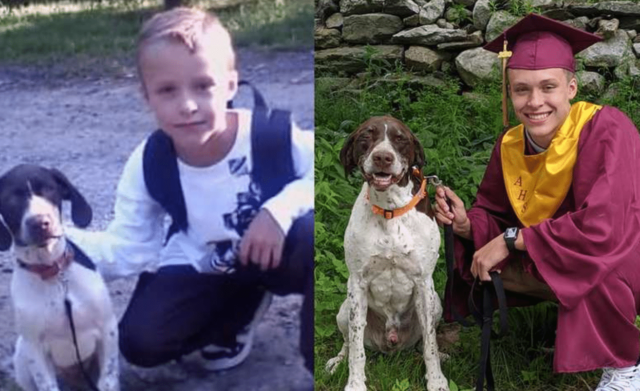 Sometimes, realizing how much time had passed can bring us to tears over how much we’ve gone through. This was what Dylan and his family felt when he graduated from high school as he posed with his beloved pup named Ruger in his graduation robes. They were trying to mark this special occasion by recreating a photo from his past – his first day of school with the loving pup.

Ruger was considered as part of Dylan’s family and they knew they couldn’t leave him behind for such an occasion as this one. Through this photo-op, Dylan’s mom thought it would be the best way to relive the teenager’s experiences. After all, the pooch had been there since day one, making sure Dylan had someone to accompany him in every milestone in life.

Ever since the pup’s adoption, Dylan and Ruger never got separated. They formed a special connection as with any other kid who grew up with a pup in the household. They treasured every moment they had with each other, making sure neither of them felt alone.

With Dylan now reaching yet another milestone in his life, Ruger was naturally progressing into his senior years. He was later diagnosed with cancer and it broke everyone’s hearts when they found out his time would soon come.

Understandably, Dylan’s graduation picture with his pup would be very special as it could be the last milestone Ruger would get to see. Placing the picture side-by-side with his old photo brings us to tears knowing how much the young man would miss his pup. It showed the longevity of their friendship, stretching through Dylan’s high school years and graduation.

For now, Ruger enjoys his remaining days with lots of love from Dylan and his family. He is comforted in knowing that Dylan will achieve great things in life with all the accomplishments he’s seen thus far.

Learn more about Ruger’s story with this video.