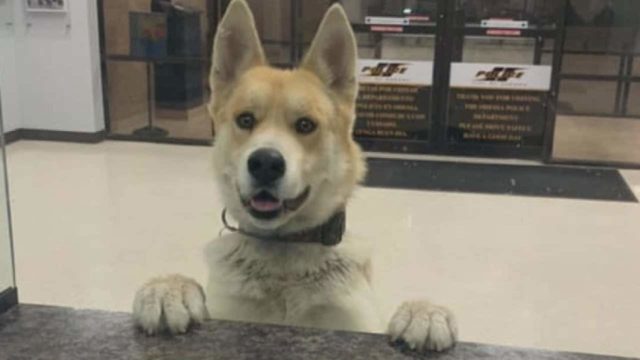 Part of the job of being a police officer is working odd hours. Sometimes you have to stay alert through the night in case there is an emergent situation that needs attending to. Until this happens, officers usually remain in their stations or go out on patrol. There is this one doggie who paid some officers a late-night visit at the police station near his home simply to introduce himself and make some friends.

It was 3:30 a.m. in Odessa, Texas, when a dog named Chico decided to head to the local police station. The German Shepherd/Husky mix walked in and went straight to the front desk to make friends with those on call. The cops thought that he was a lost dog that wandered in asking for help in locating his owner, so the officers immediately got to it.

It so happened that Chico’s collar did not have an ID tag on it, so they decided to call animal control to check his chip implant for his owner’s details. While waiting for this to happen, they decided to have some fun and indulge the eager doggie in playing with him. The police officers were so happy to meet the dog that they even took a few photos to remember it by.

A sudden as he came, Chico left as quickly and went back home to sleeping owner Edward. This came as a surprise to officers, but they were happy to know that the doggie was safe. This brief encounter was such a blast for the officers that they even shared it on their social media – gaining the pooch tons of admirers in the process!

When the dog went back home, his owner was none the wiser about the adventure he had in the middle of the night. Edward only found out about it when his nephew showed him the post on Facebook with pictures that were undeniably Chico with the officers. One has to wonder where will this pooch visit next?

Get to know this friendly doggie by watching this: