Home Happy Dogs Willow, The Golden Retriever, Goes Viral For Imitating The Horses At The... 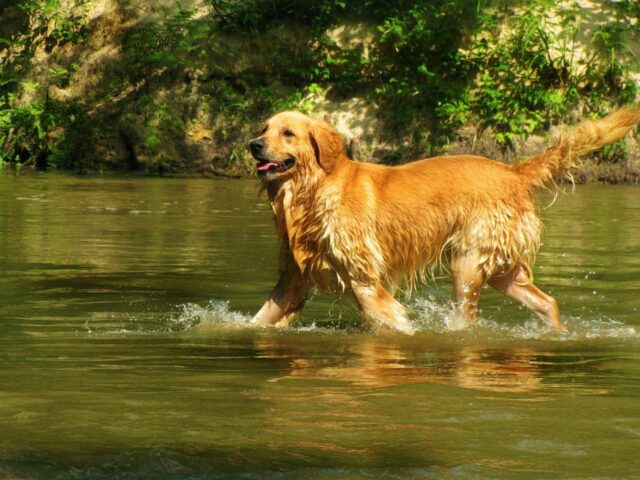 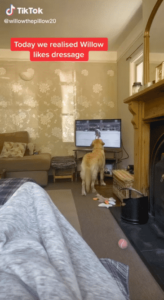 A Golden for the gold!

The entire world was tuned in for updates during this year’s Olympic games – and it was fascinating that they conducted it amidst the pandemic! But you’ll be even more enthralled with this Golden Retriever who was so engrossed with some of the event’s highlights! 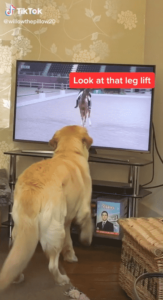 Swimming…gymnastics…powerlifting… these are just among the few sporting events that have been fan favorites for many years. But this beloved canine named Willow got pretty obsessed with dressage – a refined form of horseback riding showcasing trots and canters.

This Olympic doggo’s TikTok video went viral last July at the peak of the world-renowned sporting event. She was filmed standing so close to her family’s television, looking utterly engaged as a pristine horse gallops across the screen. Then, she lifts her paw most adorably, as if waving hello or imitating the movement of the graceful animal. 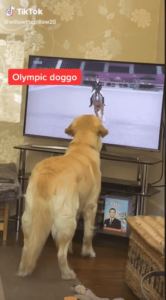 The video has acquired more than 760,000 views as of this writing. This inspired many animal lovers who took to the comments section and shared that their pets tend to do the same thing. They also said that, like us, their cats and dogs also love watching TV, particularly when there’s another animal on screen.

Los Angeles’ Jeff Werber, DVM and founder of the Century Veterinary Group in the city, said that canines who experience separation anxiety are particularly receptive to watching television. This confirms that our lovable four-legged pals could see the pictures, which is why they find this domestic hobby incredibly fascinating. He suggests using this as a safety cue, distracting them from knowing that you’re not with them. However, this won’t apply to all our pets – but those who do aren’t watching because they’re anxious.

But it appears like Willow is having the time of her life while watching the graceful creatures! There’s nothing better than a Golden Retriever eyeing for the gold at the Olympics, don’t you think?