Seeing anyone – may it be a person or an animal – walk for the first time after an injury is probably one of the most precious things anyone can witness.

That’s what just happened in this video that went viral. You can watch the video on  CBS Los Angeles’ Facebook Page. Currently, the video holds over 600 reactions and over a million views.

The pup, Pigeon, wasn’t really a pigeon that can fly. In fact, she is a  dog with a disability because of a car accident. It took him quite some time before she was able to walk again on wheelchairs. 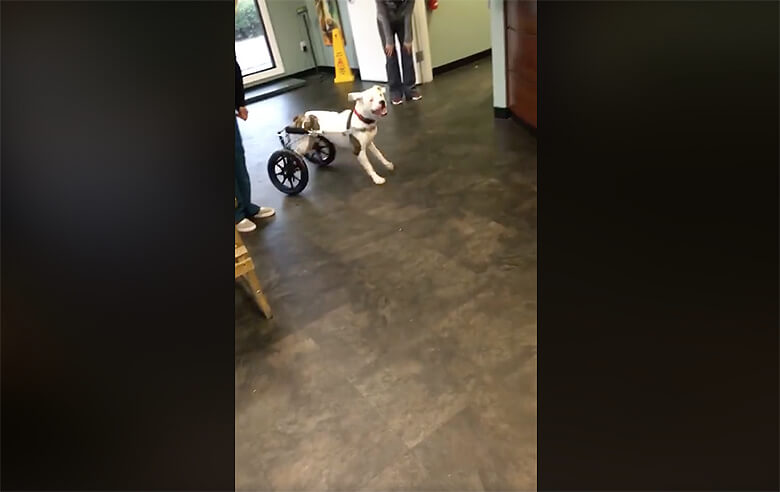 The accident caused too much harm to Pigeon, the dog. She got serious injuries during the accident that even after recovering with her major wounds, it took her a while to have the wheelchair attached. His other minor wounds still ache him.

She is in the middle of paralysis when Pigeon’s dog parents met her. It is an act of pure and unconditional love these human beings felt the moment they saw her.

Pigeon showed the same level of excitement and love for her pup parents especially when they were finally able to get the wheelchair from Eddies Wheel for Pets. The company enjoys making custom chairs for disabled four-legged animals like Pigeon.

Thanks to the wheelchair and the rehab done on Pigeon, she was finally able to walk again after the longest time. In fact, shown in the video was her moment on a  wheelchair for the first time. You can notice that she loved it so much that it made her pranced excitedly around the area.

Her owners now keep her and have built a small family between them. Pigeon can now play with her brothers and sisters without a problem.