Home Happy Dog Stories Pit Bull Rescued From An Abandoned Apartment Shows Everyone How Grateful She... 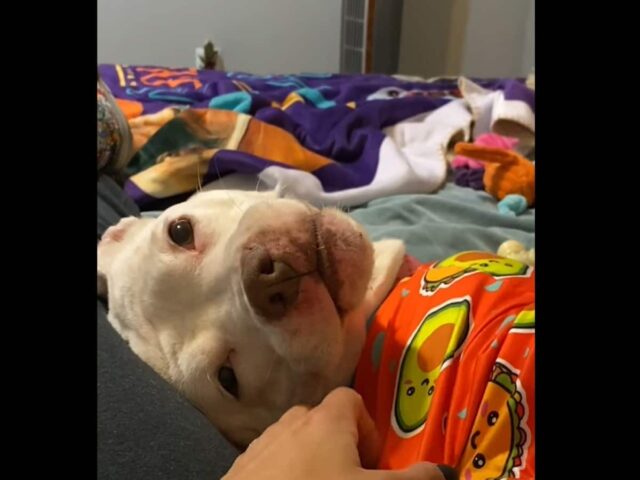 Tara and her friend went out to change a lock on their apartment when they saw an emaciated dog inside a kennel next to an abandoned unit. They rushed to get the poor Pittie out of the cage and brought her home with them.

Tara and her friend laid the dog on the doggy bed in the bathroom and wrapped her up in comfy blankets to keep her warm. Tara named the pup Daenerys and reassured her that everything would be okay.

Pittie Abandoned In An Apartment Is The Toughest Little Chick

She’s so happy to swim in the lake, she can’t stop biting the water 😍

Tara recalled that Daenerys did not seem to be afraid of them because she did not show any signs of aggression. Daenerys never growled nor backed away from them, and she would even lean in to ask for more back rubs.

Tara checked up on Daenerys, and she saw the poor Pittie sitting in the bathroom corner. She was surprised when Daenerys came up to her with her tail wagging despite not having the energy to do so.

Tara recalled that Daenerys had trouble moving and lifting her head after the unforgettable encounter she had with the Pittie. Tara believed that Daenerys must have used the remaining energy left to let her rescuers know that she would trust them with her life.

Tara admitted that she has never seen a dog who still trusted humans despite the horrible neglect and abuse she experienced with her previous owners. Fortunately, Daenerys’ health improved after five days. and finally had enough energy to stand up on her own and walk around a little bit.

Daenerys’ personality eventually started to show, and everyone quickly figured out that the Pittie was an extremely affectionate dog who wanted nothing but to cuddle. Tara surprised Daenerys every week with new stuffed toys, and the dog would not stop showing how happy she is with them.