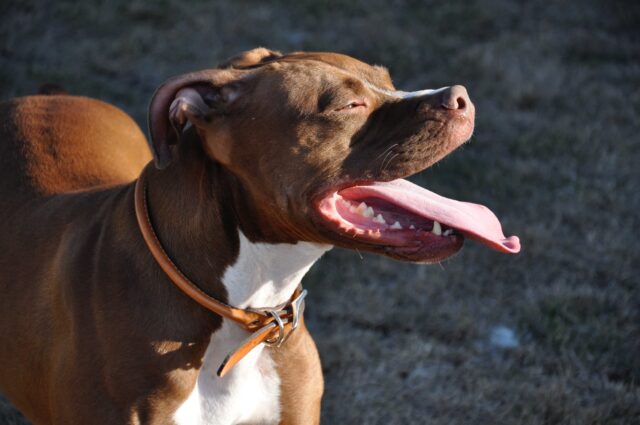 Apollo is a six-year-old pit bull, who can sit, shake, and catch a treat with about 70% accuracy. However, it was only just recently when his fur mom, Tori, discovered that the goofy pup also had another hidden talent that most dogs didn’t have: tie-dying.

Tori learned about Apollo’s talent when she went out to run a few errands one day and left the pup home alone. As soon as she left, the cheeky pit bull immediately made a beeline for the bathroom. This was no surprise, though, as Apollo loved drinking out of the toilet bowl. In fact, he would always do so whenever given a chance.

Lucky for him, the bathroom door didn’t latch properly when Tori closed it before she left, giving him the perfect opportunity to sneak a drink. He genuinely believed that he would get away with this without his fur mom knowing. But unfortunately, he was wrong.

You see, sitting on the bathroom floor was a pile of Tori’s laundry and a spray bottle of bleach cleaner. When Apollo snuck inside the room, he accidentally knocked over the bottle of bleach. It eventually leaked into the laundry pile and stained some of the clothes. Luckily, he didn’t touch the harmful liquid and came out of the bathroom just fine.

Of course, Tori quickly noticed the bleach-stained clothes when she arrived home later that day. She was understandably worried that Apollo might have gotten hurt. But after making sure that he was alright, she went to assess the damage he had done to her laundry.

That was when she found her plain black T-shirt that now had a cool design. Apparently, it had been crumpled in a way that created a unique pattern when bleached. Tori loved the shirt as soon as she saw it and immediately forgave Apollo for sneaking into the bathroom. Look at the artistic pittie and his eye-catching tie-dyed shirt here.

Doggo with accidental art he create when he knocked over a bottle of bleach cleaner that leaked onto some laundry. (No doggos were harmed in the making of this art).